From all the dreams you had as a kid, when did it become Comfortable To Be Poor?

Houses for sale for 10 million pound, cars that are priced for 100k.

You can buy a handbag for 2000 pounds probably more!!!

For people like me who grew up with my dad out on the drive at the weekend fixing the car, or filling in the rust with plaster? – just so he could get to work in that car next week.

He was out there all the time. I remember one day the red Peugeot was broke.

May Dad was out there all weekend trying to fix it. Monday came around and there was no other choice but to call a mechanic.

This is just one story I can tell you about my dad and cars. How the hell some of those cars passed the MOT I don’t know.?

This got me thinking…… 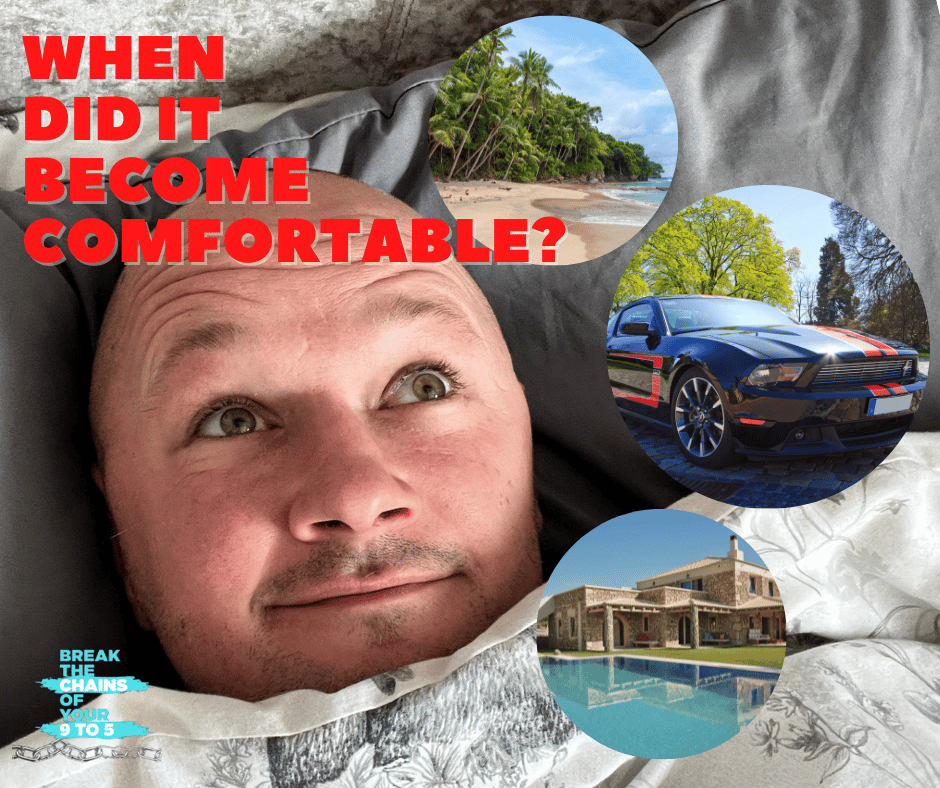 Why didn’t he just buy a new car. Get a loan from the bank, it would have saved him so much time and money in the long run.

My Dad was the same as so many people. Who look at a person in a brand new Lamborghini and think dickhead!

Don’t even know the guy – the fact that he’s got a nice car, he’s an instant dickhead.

That person had done something in their life and not got Combatable To Be Poor.

When I was young I used to look at all these cars and think…One day I want one of them.

So I became a mechanic and worked for a garage in £78 a week.?

One day I looked around at the 40 year old mechanics and saw the cars they drove. That’s what made me think mechanics is not for me.

Plus it was wet and cold getting covered in oil all day as an apprentice mechanic.

Moving Onto Plan B Not To Be Comfortable To Be Poor

Then my plan was to become an accountant, so I back to collage.

Accountants get good money. I could one day have that sports car I thought.

Whiles at collage I was working evenings delivering pizza. Evenings as an 18 year old was rubbish.

In the summer holidays I was offered a job as an electricians mate.

After starting that  job and the dream of having the sports car faded away.

Over the years I became my dad. “Look at that show off in the Porsche”

I was content that I would never own a car like that. Content that I was going to be an electrician and earn around 50k a year for the rest of my life.

50k a year isn’t a bad wage, so you can see why I settled. But I got Combatable To Be Poor, Not so poor I couldn’t afford nice things – I wouldn’t say I was rich that’s all.

But those dreams of a sports car and a luxury lifestyle never disappeared.

Going Back To Plan A

I wanted to earn more money, so starting my own electrical business was the next best option.

That’s what I did for 20 years. Although I had some nice cars and fancy holidays – they all came at a price.

I have never been Comfortable To Be Poor

I worked all weekend, nights, long hours  – then spent the money I made only to have to do it all again the next time round.

I would say that 90% of the population think like this. You have a constant income and your life is built around what you earn in your job.

You want more – you work harder and longer.

Until one day your body is so warn out that you cant do it anymore and sit in front of the tv until you die.

Well I cant see myself doing that, I didn’t want that from my life. I want to live the dream.

Own these fancy sports cars, have a lovely big drive to park it on and not have to work about the load installments.

I want to be that person my dad called a dickhead.

Knowing it was possible, It was just a matter of finding out HOW?

9 to 5 Jobs Is Not The Only Option

Finding out that there are 1000s of people doing the same opened my eyes to what could actually be achieved made me even more excited to do something about it.

Being my own boss was something I was used to for a long time with being an electrician, but with a different business model and using the power of online marketing – that sports car and luxury lifestyle was actually archivable.

After being involved for 4 years now I find it hard to understand why everyone doesn’t want the same things out of life as me.

It comes down to how much work you prepared to do. I have a friend who has worked for a number of company’s over the years, the guy is a clever bloke – I would say more clever then me.

I asked him why he doesn’t start something of his own with all the knowledge and experience he has.

He told me that building a business of you own takes time and effort, something he would love to do, but at the moment in life he wants to be able to spend his spare time with his family.

His children are young, at an age where they want to spend time with mum and dad, so that was his main focus at the moment in life.

I respect that answer so much. With everything in life and having your own business and being you own boss does take time and effort.

Having your priorities on your family is something I truly admire.

A lot of people should do the same in the world.

How Far Away From The Sports Car Am I?

Great question! One that I often want to know the answer too. How much do I need, what type of car should I get?

The thing is I could go out and get that Porsche 911 or mustang today.

I wouldn’t have much left over – but I could have some fun in it for a while.

As I have got older and educated myself a lot more about money – my Porites have changed.

The spots car would be great to have, but its not practical for my life at the moment. I go everywhere with the dog.

When I do go out for the day it normally with a motorbike, so I take the van.

I just don’t see the benefits of owning a sports car when to be honest I can just test drive them or rent one.

I’m aiming for  a house now. A big house with plenty of land.

A few chickens, maybe even a donkey – who knows.

That’s the type of thing that makes me happy these days.

I am still full of ambition and drive to build a huge world wide business, but for different reasons now.

To help and show people all over the world what is possible. Don’t give up on the dreams you had as a kid.

Do something to make those dreams come true.

Like checking out the free book in the show notes. Cover the $7 postage and read how you could start the ball rolling towards making all your dreams come true. Don’t get Comfortable To Be Poor.

There is no reason you have you live in poverty in this day and age if your prepared to do something about it.  Being skint is just another word for poor.

With reading a free book for 2 hours, you can figure out a way to start to make all your dreams come true.

>>Learn the art of working online<<