If you could be in the right place at the right time for a software launch or know what’s trending right now? What would you do with that knowledge?

Following the road of success.

I reached out the Spencer Mecham who has been working in the online space 7 years.

Spencer’s achievements within that time, range from –

With all these achievements, I had to reach out and find out how it all began.

Where It All Began

Equipped with a public relations degree, Spencer looked at his current position as he was capped at a low salary in his job.

Having a child made him realize just how much life costs. With seeing how much money he could make in his current career, compared to how much he needed to make.

With plans to have more than one child Spencer came up with the idea to start a side hustle online.

Being super safe with his choices, Spencer didn’t just quit his 9 to 5 job and pursue an online career.

In Spencer’s own words he “side hustled” it until he was making the same money in his regular job. Then made the decision to quit his 9 to 5 job.

The journey was tiring with working his 9 to 5 and building a side hustle in the evenings, but with less stress having to rely on one source of income.

Which in my opinion is a great way to start online.

If you just quit your job and go all in to becoming your own boss, things can begin to get stressful when something doesn’t work out straight away.

With the original ambition to have a goal on and extra $500 -$1000 a month. Spencer hadn’t set his goals extremely high. It wasn’t until his research uncovered the protentional of an online business that he saw it as a full time career.

Then when he began to make the same amount of money from the side hustle he had created, Spencer realized that there was no need to have a 9 to 5 job any more.

“That was an awesome moment “ Spencer said ?

Originally at the beginning, Spencer started blogging for a 18 months without any success.

Although there was no money made in that time, the time blogging was a great learning curve.

This is where Spencer started You Tube, unlike many people who start with you tube.

The success began with the first few videos.

With the you tube videos being successful, it gave him the enthusiasm to create more content on that platform.

I asked Spencer why he thought he was so successful, he explained that the videos he was creating were about the click funnels software.

Which at the time was pretty new to the market. So to continue the momentum of success Spencer was very active in the click funnels community.

Where he was building funnels for other people long before he ventured into the world of affiliate marketing.

The hard work with click funnels began to pay off after winning the click funnels Dream Car and being presented with the award on stage. 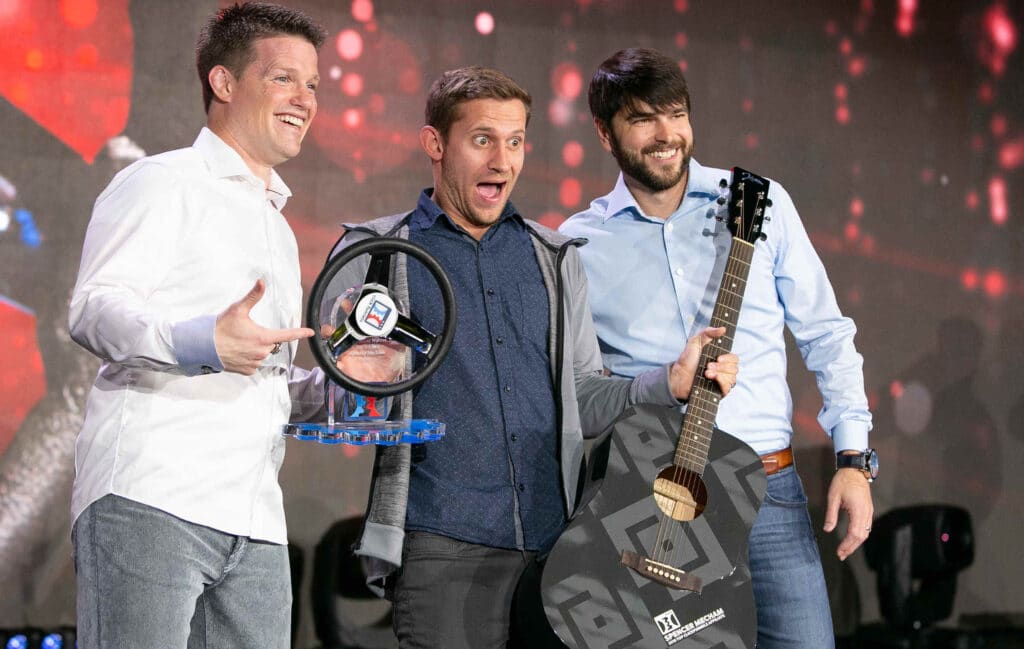 One of the amazing things I learnt about Spencer was that he didn’t actually do any training on how to build a you tube channel. But has still managed to grow a channel to over 111k.

He will admit that it a lot slower his way, with watching plenty of you tube videos for the first 30 videos.

After that Spencer has invested in plenty of courses to help his channel grow.

The Buildapreneur you channel has grown bigger then Spencer thought. Even having what he thought was a safe bet with his wife for when it hit 100k.

Unfortunately for Spencer, Mrs. Meacham is able to cash in on that debt, now having a following of over 111k.

Like many entrepreneurs Spencer Mecham didn’t originally start out in affiliate marketing. He was creating videos on another channel called Wealth Hacks.

Teaching lessons on the stock market. Although having success with the videos he created, Spencer wasn’t really that interested in stock markets.

This is where he started a new channel Buildapreneur and started on the entrepreneurship journey with click funnels.

2017 Bitcoin was a very popular topic all over the world.

Spencer decided to make a video on how to buy bitcoin on his wealth hacks channel.

He watched a video on how to buy bitcoin and then went out and created his own video. That video blew up.

Of course with 300k views Spencer helped his audience with a link to buy bitcoin themselves. That was an affiliate link generating over ten thousand dollars.

That channel at the time only had 500 subscribers at that point.

There is a Patten emerging here with Spencer Meacham’s choices in videos.

From what Spencer learnt with that video he was able to do the same thing again.

One of his videos mentioned was a video I actually used myself to create another stream of income.

The RIGHT Place – At The Right Time

It seems to me that Spencer is very good and promoting the right product at the right time.

A huge piece of advice I got from talking to Spencer was to see what everyone is doing when they start a you tube channel.

Click funnels is am amazing software with a great affiliate program, but its old news.

There are 1000s of videos over you tube to do with click funnels. To be able to become successful with you tube fast. You need to find the newest hot topic.

Working online with the internet growing and changing every single day, don’t EVER pass up looking at a new opportunity.

I completely agreed with Spencer when he told me that 95% of the content created in the make money online space is either lies or hype.

Spencer, like myself wants to come across as the 5% that don’t feed the hype, that you can make 10k from your first week of working online.

These types of claims are getting out of control.

The reasons Spencer got into the whole online space was to have a lot more time freedom. Although Spencer has done a coaching program in the past, his main focus is you tube.

10 million people and still growing have watched Spencer Mecham’s content he has created online. In his own words – that a look of people watching you.

Having an original plan of creating an online business to replace the 9 to 5 job, Spencer never anticipated the success he has today.

Having broken the chains to his 9 to 5 job a long time ago, I asked Spencer “what is the best benefit about working online as your own boss?”

A whole load of things came to mind, but one of the best things was time management.

If one of the children wanted to play outside with Dad for a while – Dad can actually drop what he is doing and go outside and play.

You don’t have to clock out for an hour or tell anyone – just do it and pick up where you left off later on.

Spencer has a goal in mind that he is aiming for.

From there you will be able to access the Buildapreneur website and find out even more about Spencer Mecham.

To see the whole interview and more – Join my group on Facebook where I share behind the scene tips on growing a business online allowing you to Break The Chains of your 9 to 5.