No Way! It’s not happening….

How can I Make Money By Spending Money? I don’t want to spend that much money ever
How many times have I said that?
I do it all the time and still do it now.
I’m not gonna spend my hard earned cash on something that’s not going to benefit me. 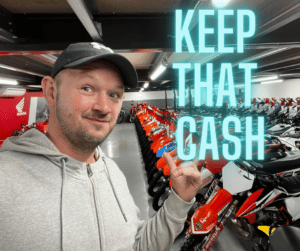 So I think about it for a LONG time and when I finally bite the bullet and spend some of my income, it turns out I should have done it a long time ago.

This Has Happened Before….

I started in the world of affiliate marketing with promoting low ticket items on Amazon.
I spent some money and ended up quitting my job.
I had a bike I was constantly fixing.
I spent some money, saved time not having to fix it, also became a better rider.
The result of spending , made my life better and eventually helped me make more.
I learnt from the affiliate marketing course I bought along with sold it for commissions.
I got out more on the bike and made more videos to put on YouTube, where that made me more income too.
MONEY is a tool! Use it to better your life – after all why the hell did you work so hard to earn it?
For less than $10 you can figure out how to make a plan on starting something of your own in this book.
It will give you a detailed plan on where to start in the world of online.
Click Here
Less than an hours labor in most 9-5 jobs.
BTW : I spent some money again today and once again
I’m glad I did