How To Work With The Algorithms On Social Media

How many times have you heard someone say they have a brand new strategy that hacks the Algorithms On Social Media platform?

Only to find out it doesn’t work anymore because the algorithm has changed.

Hacks that I was told worked

1. When the new 3D photos options came out on Facebook, everyone was posting wonky photos just oy use the new feature.

2. Using a specific hash tag in your post to be able to get your content in from of that audience.

3. Then the worst of all, engagement groups. Groups of people who comment on each others posts in order to trick the algorithm that it’s a popular post.

All these hacks are a complete waste of time. Which damage your brand rather than build it.
The goal is for the algorithm to work in your fav, and want to show your content to the correct audience.

The way to actually do this came from an idea I got from a film Finding Nemo.
When building a brand from scratch its hard to get noticed out on the internet, but what if there was a way you could join the flow of traffic that is already working?

Join the slip stream of traffic of successful entrepreneurs who have grown an audience already? 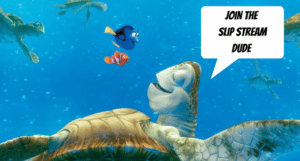 Check out what already working for other people who are in the same area of business.

Then go that step further to make your post even better. Check the comments of that post to see what questions the audience is asking.

Also take note of the image attached to that post if there is one. What does that image have in it that captures the attention of the audience.

Then with all this information at your fingertips – start to create you very own post.

When the audience engage with the content with likes and comments, the algorithm will automatically recognize this as something people want to see.

Pushing it out in front of a bigger audience to keep more people on that platform.

What Algorithms On Social Media Want

The example here is for a post on Facebook, however the concept works the same on all social media platforms.

Every social media platform has an algorithm that is designed to keep a person engaged and on that platform.

This is how you become part of the slip stream and ride the wave of engagement.

To advance this method even more you could make sure you are posting with purpose.

I have a video that goes into detail on how to post with a specific outcome in mind.