In 2011 I received this message from a builder I was contracted to.

It was hours before I was due to board a flight to go snowboarding.

Which I had been excited about for a long time.

Working long hours as an electrician, you look forward to a little time off.

I had be doing a lot of work in a care home.

The job had been completed and invoiced – but not yet paid.

Over the weekend everyone had moved into the care home, but then found one of the flats had a bathroom light that did not work.

Normally this could have waited until I returned – However as it was a care home everything had to work perfect all the time.

The builder was my best friend when we were doing the job.

When a problem came up – as always, everyone looks to point the finger.

As it was electrical – that finger got pointed at me.

Harsh I know – but that the building trade in the UK.

You never know how long a job will take when looking for an electrical problem.

So I had written off the flight I was supposed to catch.

Gutted and annoyed I turn up to fix the problem. You have to be nice.

The customer is always right. (I hate that saying – There NOT)

I knew for a FACT everything worked fine when I left – so the first thing talk to the tenant in the flat.

This 90 year old elderly lady told me her grandson helped her move in.

Even put all her pictures up for her……………

Sure enough, I took the picture down and a big black mark was on the wall, where he had went straight through the cable!

20 min fix and a cup of tea with the old lady talking about the snowboarding trip.

She even gave me a £1 tip to treat myself.

£1 I know, but it was the brilliant thought that counts.

It wasn’t my fault after all – the builder was a complete ass about it.

Is it any wonder I went looking for a better career 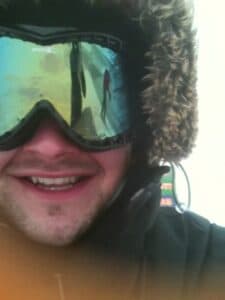